April 28, 2022April 28, 2022
Last April, Zack Payne started as the Youth Director for the Wisconsin Conference. He remembers it was a “rough-and-tumble kind of summer” at Camp Wakonda.

Within one month, he had to move, hire staff, learn the ropes, and be ready to run the camp. But by God’s grace, he got through it and the young people made decisions for Christ.

Even as Summer Camp 2021 was beginning, he was starting to plan for Summer Camp 2022, with the goal of being ready well ahead of time. He even had the next summer’s theme song chorus figured out, and his plan was to have a demo recorded by summer’s end. Fast forward several months later. He never did finish that song. “I’d tweaked it and played with it,” he says, “but it still never sat right.”

At the beginning of April, Zack sat down and played the song for his wife, Ally. He remembers, “she made a face,” indicating it wasn’t hitting quite right. “Ok,” he told her, “Let me try something different.”

It was only a matter of minutes before he’d strummed and hummed something into existence. It came surprisingly quick. He wasn’t sure if the melody was from another song he’d heard. Ally thought it was pretty good, but they needed another opinion.

The Wisconsin Conference has a mentorship program where seasoned pastors are paired with pastors who have yet to be ordained, for the purpose of getting together and talking through questions, issues, and ideas in ministry. Zack was mentoring Rhinelander district pastor, Cristian Sorto, who he knew was into music. After making a rough demo on his phone, Zack sent it to Cristian, asking which he liked better: the first song he was trying to make work, or the new, spur-of-the-moment one. Cristian replied that the new one was the way to go and that he’d play around with it a little, maybe recording his own demo version.

Zack knew that Cristian had some background in music, but he had no idea how serious. “I didn’t realize that he had been heavily involved with music since he was younger, with four albums under his belt (the fourth is set for release June 3, via streaming platforms), and having produced the last two albums himself,” says Zack. It turns out Cristian had learned to produce, arrange, and mix music because he had extra time during the pandemic. “Some people watched ‘Tiger King’ during the shutdown,” mused Zack, “Cristian learned a profession.”

Later that week Cristian sent a demo, which Zack really liked. Cristian had tweaked a few lyrics and added a bridge. A week later, Christian and some friends recorded (from a distance) instrumentation for a more professional version of the song. “When I heard the track,” says Zack, “I was so impressed with the quality.”

When he was asked about the other musicians involved, and Cristian explained that they are both professional musicians and engineers in South America—Mattheus in Brazil and Sebastian in Colombia. They became friends through social media and were always creating something new. Cristian says that when he makes a demo, he sends it to Mattheus, who then arranges the ideas; they record live instruments, Cristian produces the instruments and vocals, and then Sebastian puts the finishing touches with his great mixing skills. “It’s amazing to see ideas come to life,” Cristian notes, “and they both desire to serve God wholeheartedly. That’s what makes them stand out, and what gets me excited to create with them.”

When Zack and Ally met up with Cristian to record their vocals, it was an interesting experience. “It was funny singing over a fully developed song that I probably spent about ten minutes writing before sending to this young pastor and his team,” Zack recalls. “It struck me that this was no longer my song. The Holy Spirit inspired me in the writing, Cristian in the production, and his friends in the technical aspect. I had been planning on this other song for months, but God flipped the script and inserted a different idea.”

While he’s grateful to have an original theme song ready to go for this summer at Camp Wakonda, Zack says he’s even more grateful that Cristian was involved. “Whether you’re a pastor, student, or any other young person in your church,” advises Zack, “find yourself someone to mentor. You might find yourself learning as much, or more, from them as they do from you.

Herald staff, with Zack Payne who serves as the Youth Director of the Wisconsin Conference. He lives at Camp Wakonda, in Central Wisconsin, with his wife Ally and their four young kids.
Shared from Lake Union Herald 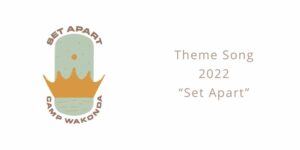 Preparation is Underway for Projects at Camp Wakonda

Wisconsin Pastor is Highlighted in the Lake Union Herald

Celebrating Recovery from Past Hurt