1867 – Johnstown Center. The first camp meeting on record in Wisconsin was in Johnston Center, WI, September 19-22, 1867. Visiting speakers were Uriah Smith, James & Ellen White. 1,500 persons gathered for this first camp meeting. Pleased with the success of the Wisconsin camp meeting, James White, suggested a “general” meeting for the benefit of churches as distant as the East Coast be held saying… “A general camp meeting of this kind should be held annually, probably somewhere in Michigan.” Recalling this experimental camp meeting, Elder W. C. White, in later years, labeled it the “forerunner of camp meetings.”

“Tents had been successful in evangelism, had attracted large crowds, but for a general meeting of all the believers, – would families be willing to camp for a week in a tent village? Elders R. F. Andrews and H. F. Blanchard [two Wisconsin pastors] wanted to give the plan a try, so in late summer, 1867, Elder Sanborn [Wisconsin/Illinois president] offered the use of his cow pasture just east of Janesville. Several notices appeared in the REVIEW. Elder Andrews wrote: “See to it that the enemy does not cheat you out of attending this gathering of the saints. If you are discouraged, come, and be encouraged and revived. If your love for the Lord and His truth is waning away, come and consecrate yourself anew to His service. If you feel strong in the Lord, come, and grow stronger and help impart spiritual life and vitality to those that need. And if you think you cannot spare the time, you are the very one that needs to come … ” Trial and Triumph, by Adriel D. Chilson

To hold a camp meeting was not new. Other denominations, including the Millerites, had done so decades earlier. What appears to be new for the Adventists at this time was to separate the formal business meetings of the church from meetings that would focus simply on “spiritual feasting.” Camp meetings would allow people to come away from their everyday lives, fellowship with like believers, listen to dynamic preaching, and encourage one another. Adventist Review  1906

1868 – There is no record of camp meeting being held in the state of Wisconsin in 1868. However, the Wisconsin/Illinois Conference at that time was combined, and camp meeting was held in Clyde, Illinois, late September of 1868. Many members and leaders were surely there in attendance. Wisconsin leaders and members were also recorded as “well represented” at the general camp meeting held September 1-7, 1868, in Wright, Michigan, which is mistakenly labeled the “first” camp meeting of the Seventh-day Adventist Church.

1869 – Clinton Junction. “The 1869 meeting was scheduled for the last week in September. Tents were pitched at Clinton Junction in a grove decked out in gorgeous autumn display. Elder and Mrs. White and Elder J. N. Andrews were present. A rain on the very day camp was to begin, kept many away. Then the weather turned cold….Since no warming trend was in sight, the meetings closed on Monday with a unanimous decision to meet in mid-summer next year.

1870 – Kilbourn City (the Dells) Held on the farm of Stephen Hungerford. James and Ellen White were guest speakers.

1871 – Clear Lake, held on the farm of Mr. Stone, one and one-half miles north of Milton Junction, June 22 – 26. (This year Wisconsin organized as a single conference separate from Illinois Conference)

1874 – Lodi,  camp meeting began June 18, 1874. Brethren were invited to send $1 each to help pay the expenses of  camp meeting. First record  found thus far of a fee connected with these meetings.

The meeting in Monroe was possibly the largest of the early camp meetings. James and Ellen White and Uriah Smith were speakers. For the benefit of those living in the western part of the state, a second camp was held at Sparta a few weeks later. On Sunday in Sparta, 2,500 persons lined the semi-circular bluff to witness a river baptism of 31 candidates by Elder Sanborn. The custom of holding two or more camp meetings begun this summer, continued for over half a century. An 1875 camp meeting may have also been held in Eagle Lake according to the book, The Story of Our Church, p 229.

1886 – Madison, Menominee. At the Menominee camp in 1886, Miss Sarah Peck, then a young public school teacher, took her stand with the Advent people. Miss Peck’s greatest single contribution to Adventist education was the authoring of the “True Education” (2 Adriel Chilsen Trial and Triumph on a Western Frontier)

1926 – Milwaukee. The General Conference held their session on May 27-June 14 in Milwaukee, which constituted the camp meeting for 1926. F. A. Stahl, a former Milwaukeean, reviewed providential experiences of the Peruvian mission. This was our church’s 41st GC session, and the first time a public address system was ever used for a GC Session. Review & Herald

1927 – Portage. A second camp meeting was also held in “north” Wisconsin. In 1927, the Wisconsin Conference secured Camp Silver Lake as a permanent ground for the annual convocation, where they met from 1927-1977. Review and Herald April 28, 1927 mentions this second camp meeting.

1945 – Camp meeting had to be cancelled in 1945 because of government transportation limits imposed post World War II. Camp meeting at that time was held annually at the Portage campground along Silver Lake. An announcement from Wisconsin in the Lake Union Herald on March 27, 1945, said “We shall all miss this yearly meeting which brings to those who attend such spiritual blessings. But these are unusual times in which we live. Many of the regular routines of life are broken into and adjustments must be made.”

1977 – Portage. This was the last year camp meeting was held in Portage. A harsh windstorm and rain flattened the kindergarten tent and a couple of family tents on Sunday night, July 31. The family tents were evacuated and all residents assembled in the main auditorium to sit out the storm. Sounds of singing and rejoicing testified to the fact that the campers trusted fully in the protection of God. There were no injuries and all returned to their tents before midnight. The next day dawned bright and clear and the kindergarten department moved into the Teen Temple. The teens joined with the youth and camp meeting proceeded without a pause. https://documents.adventistarchives.org/Periodicals/LUH/LUH19770830-V69-33.pdf

A state health inspection in the fall found several aspects of the plumbing system that did not meet code requirements so they closed the camp until these requirements were met. In a Wisconsin Conference Constituency meeting held March 5, 1978, it was voted to sell Camp Silver Lake in Portage and look for something larger, as there was no room for expansion, plumbing repairs would be quite high.

1978 – Two Camps: Wisconsin Academy in Columbus, July 28-3, and Camp Wahdoon August 3-6. Camp meeting met here while cabins were being moved from Portage campgrounds to the new Oxford grounds, and the new Camp Go-Seek was being prepared.

1979 – Columbus: Wisconsin Academy in Columbus in July. Camp Go-Seek was still being prepared.

1980 – Oxford, Camp Go-Seek (Summer camp was named Camp Wakonda, while the same grounds were called Camp Go-Seek the remainder of the year.)

2000 – Oxford – Wisconsin Conference voted both camp meeting and summer camp to have same name: Camp Wakonda. This year the “Chapel in the Pines” was created at the camp.

2007 – Oxford. The main meetings met for the first time in the new Pioneer Pavilion. Many were concerned that departing from the old tent would negatively impact the old-time camp meeting experience. Fortunately, that concern turned out to be unfounded. Comments were heard saying, “I can hear every word in the main tent for the first time in years!” “It is cooler and cleaner.” “The chairs and so much nicer than the benches.” “The new Pavilion has provided an upgrade for the camp meeting experience.” (Lamp Letter article) Also, the 5k Hallelujah Hustle run/walk was held for the first time this year.

2020 – No camp meeting was held in this year as Marquette county was not allowing groups of over 50 to meet, for safety reason during the COVID-19 pandemic. A one-day special Celebration Sabbath was scheduled to meet at Camp Wakonda on August 29, 2020, to allow our Wisconsin church family to enjoy some worship and fellowship together due to the unfortunate camp meeting cancellation we experienced. But, by July 16, this gathering too had to be cancelled due to the continuing COVID-19 restrictions. This was a major disappointment for everyone.

2021 – Camp meeting resumed at Camp Wakonda in Oxford, after last years closure due to COVID-19. 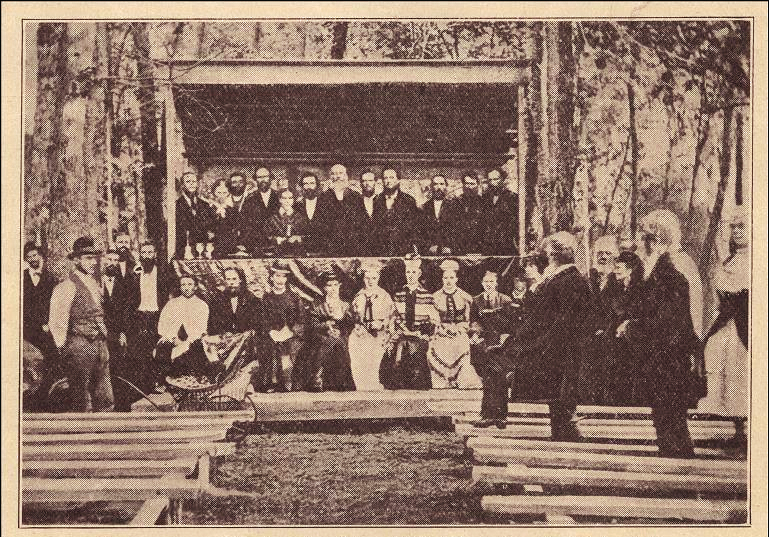 Rare picture of Adventist camp meeting, 1875 or 1876 in either Eagle Lake, WI, or MN. Sources unclear. 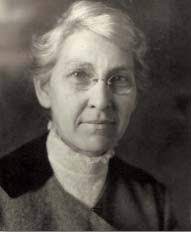 At the Menominee, Wisconsin, camp meeting in 1886, Miss Sarah Elizabeth Peck, then a young public school teacher, took her stand with the Advent people. Miss Peck’s greatest single contribution to Adventist education was the authoring of the “True Education.” Sarah (1868-1968) was an educator, writer, missionary, and literary assistant to Ellen White. 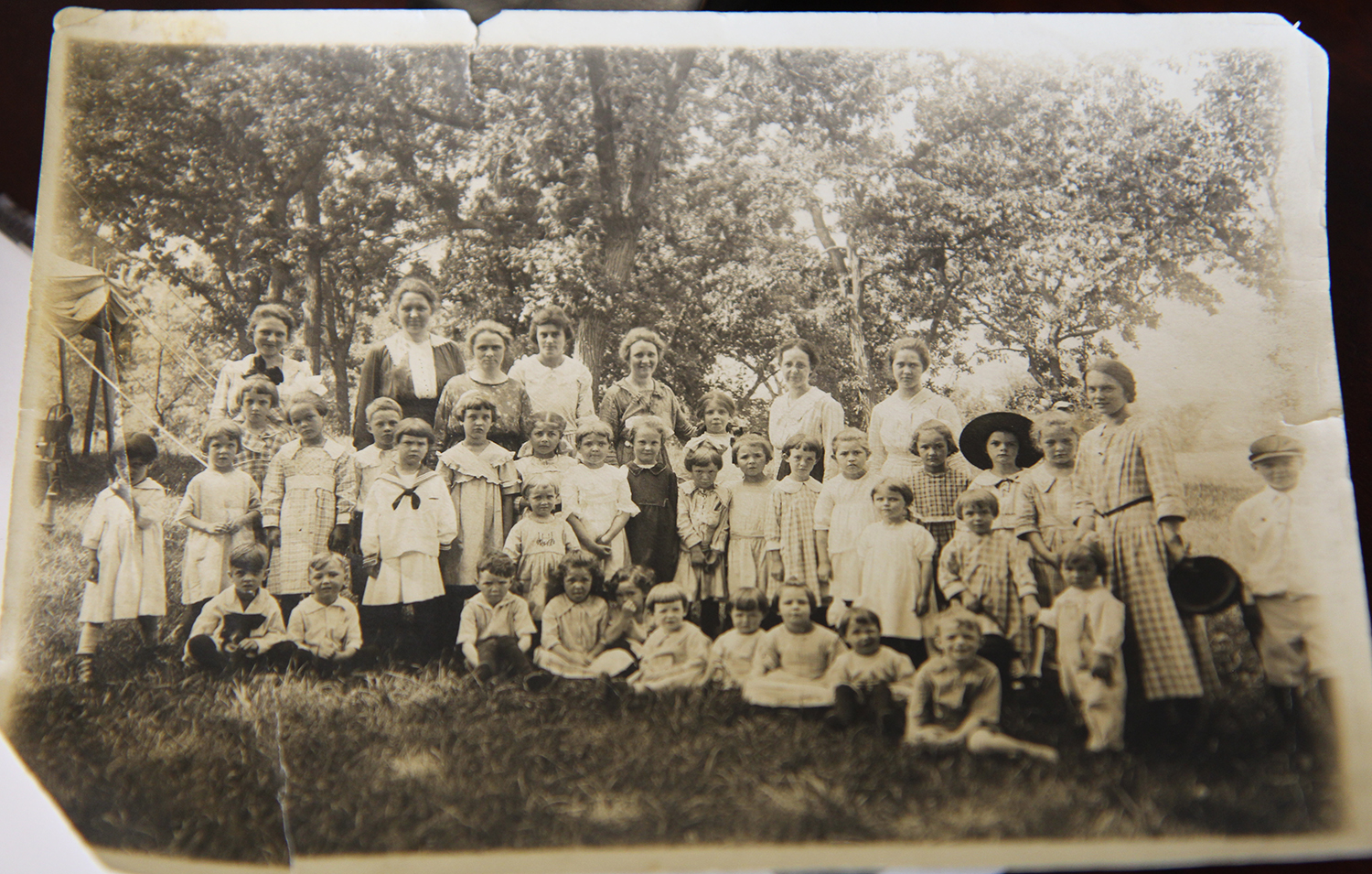 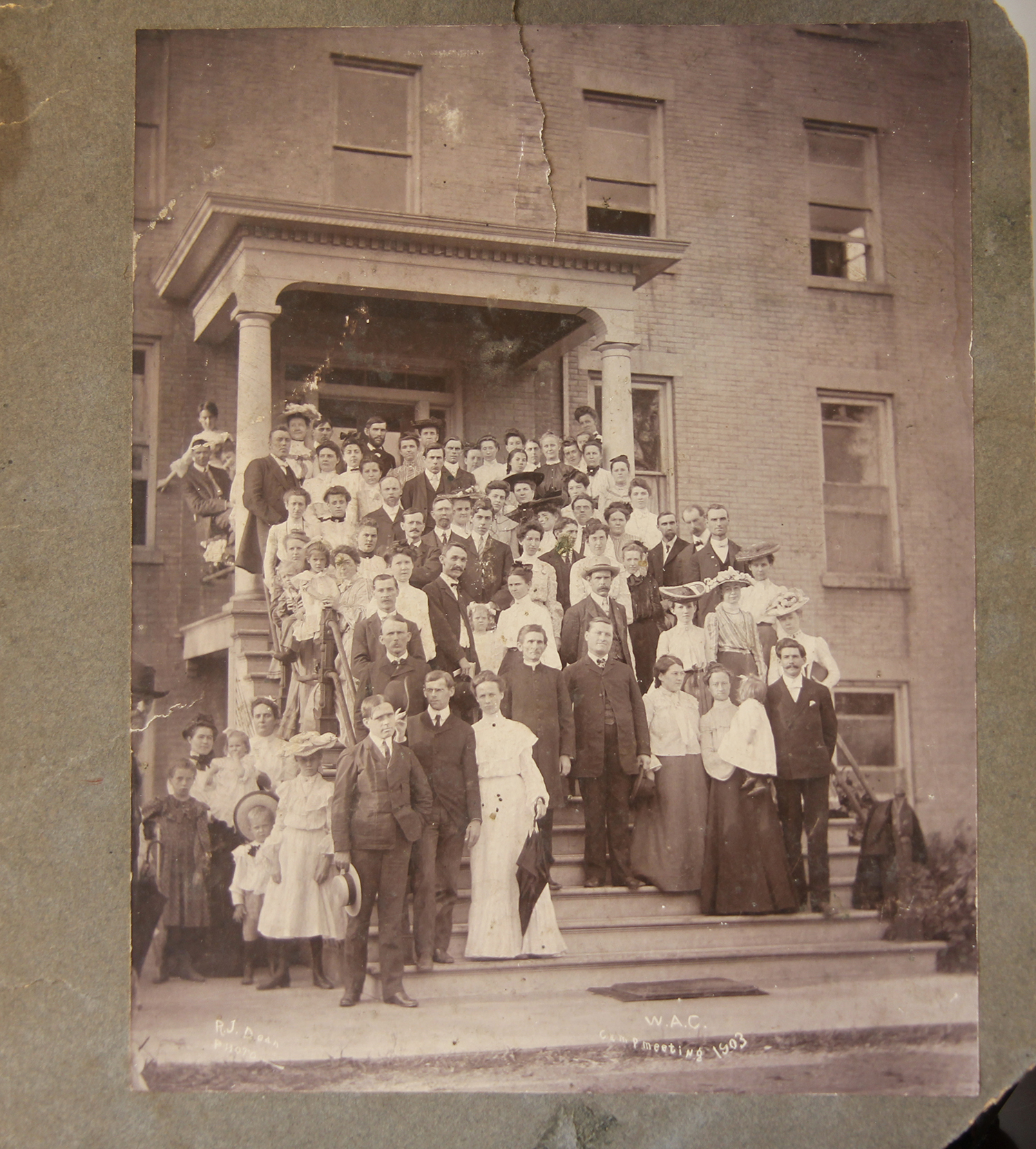 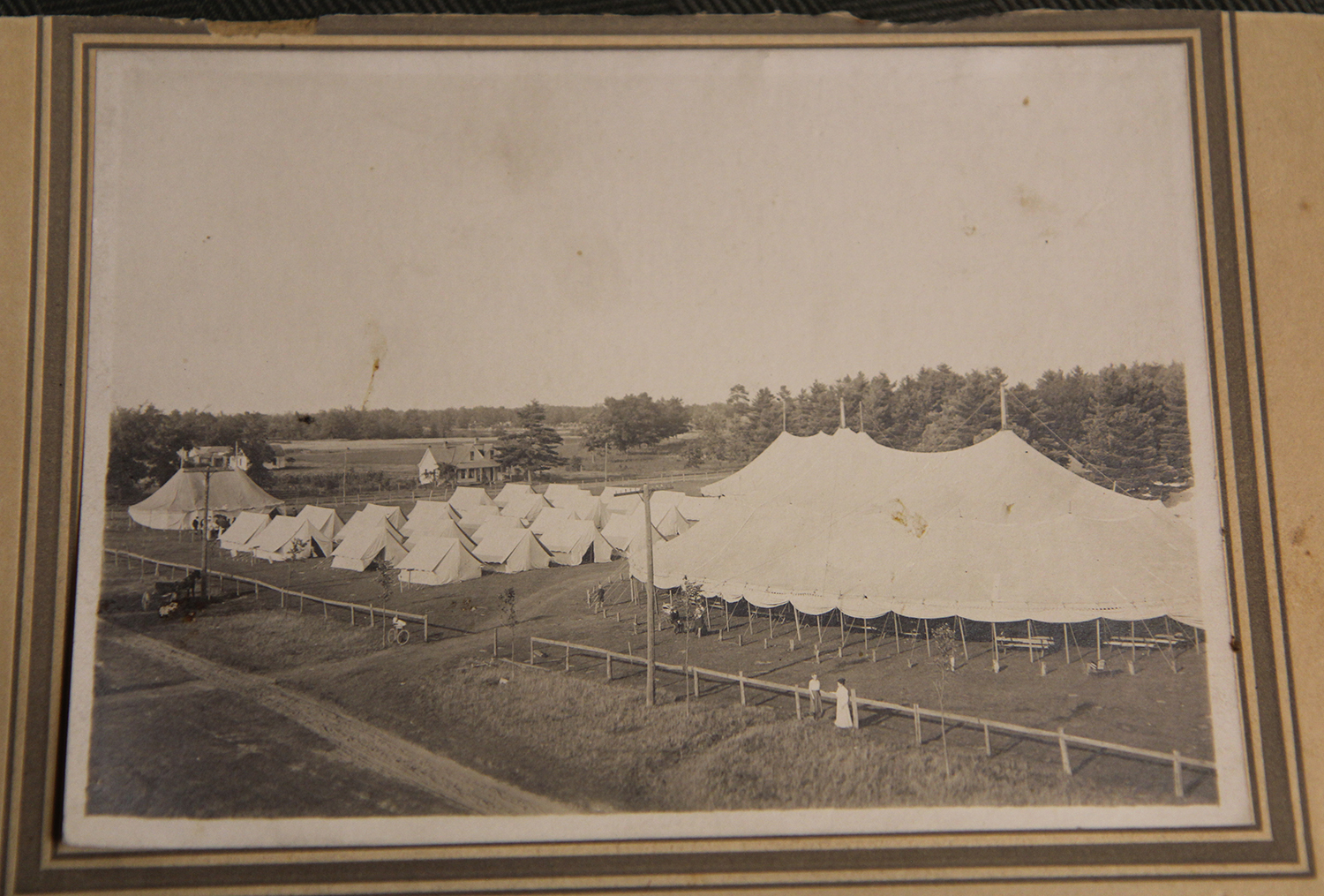 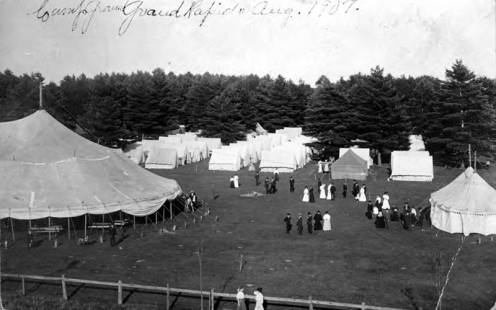 1926: Delegates at the GC Session held in Milwaukee, WI, standing outside the auditorium. This meeting doubled as the Wisconsin camp meeting in 1926. 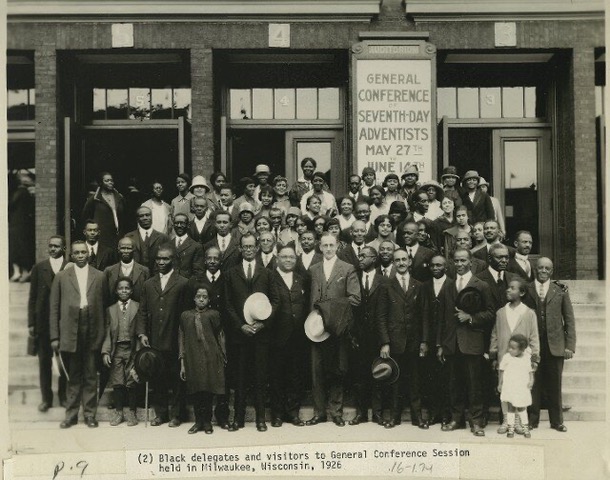 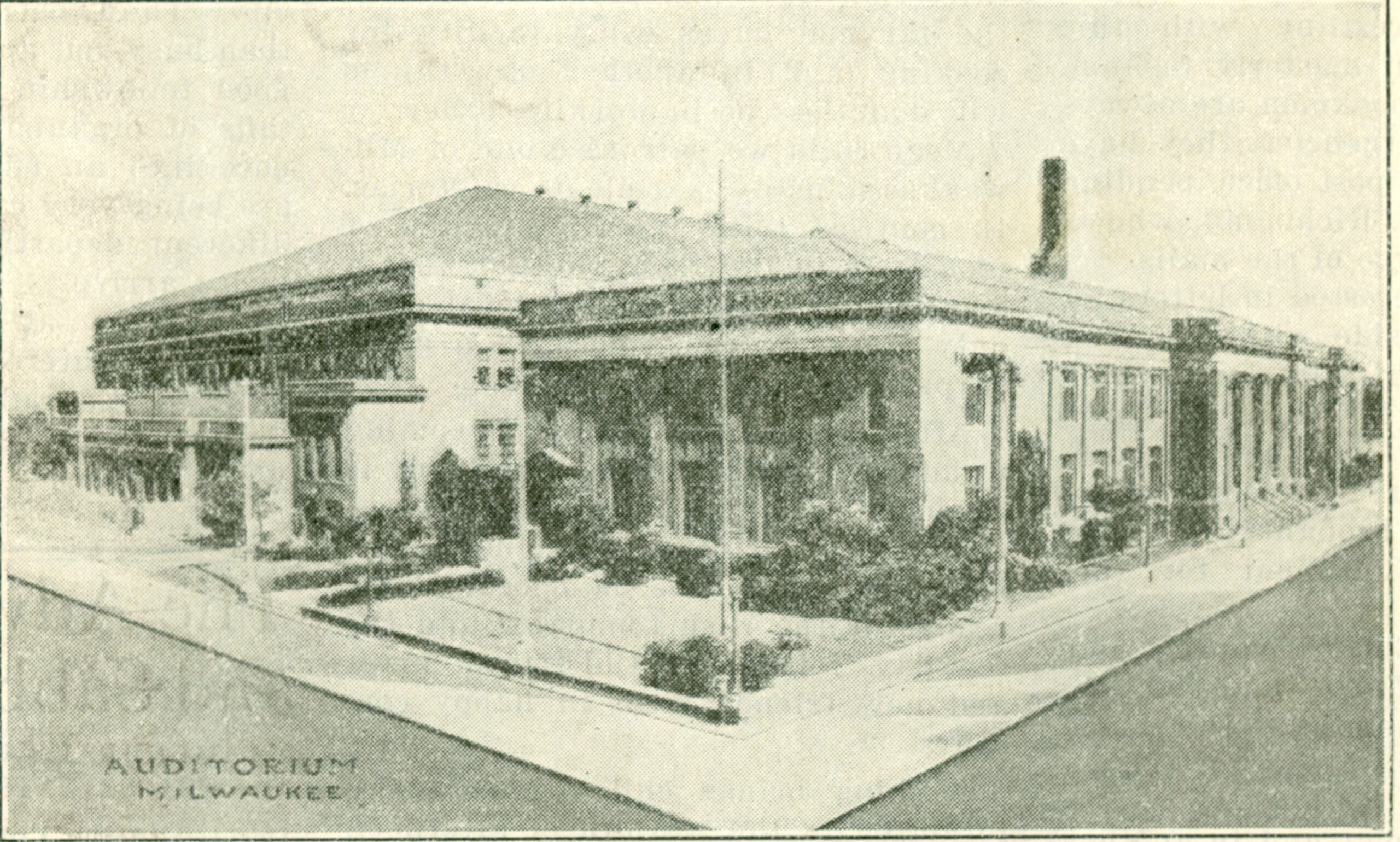 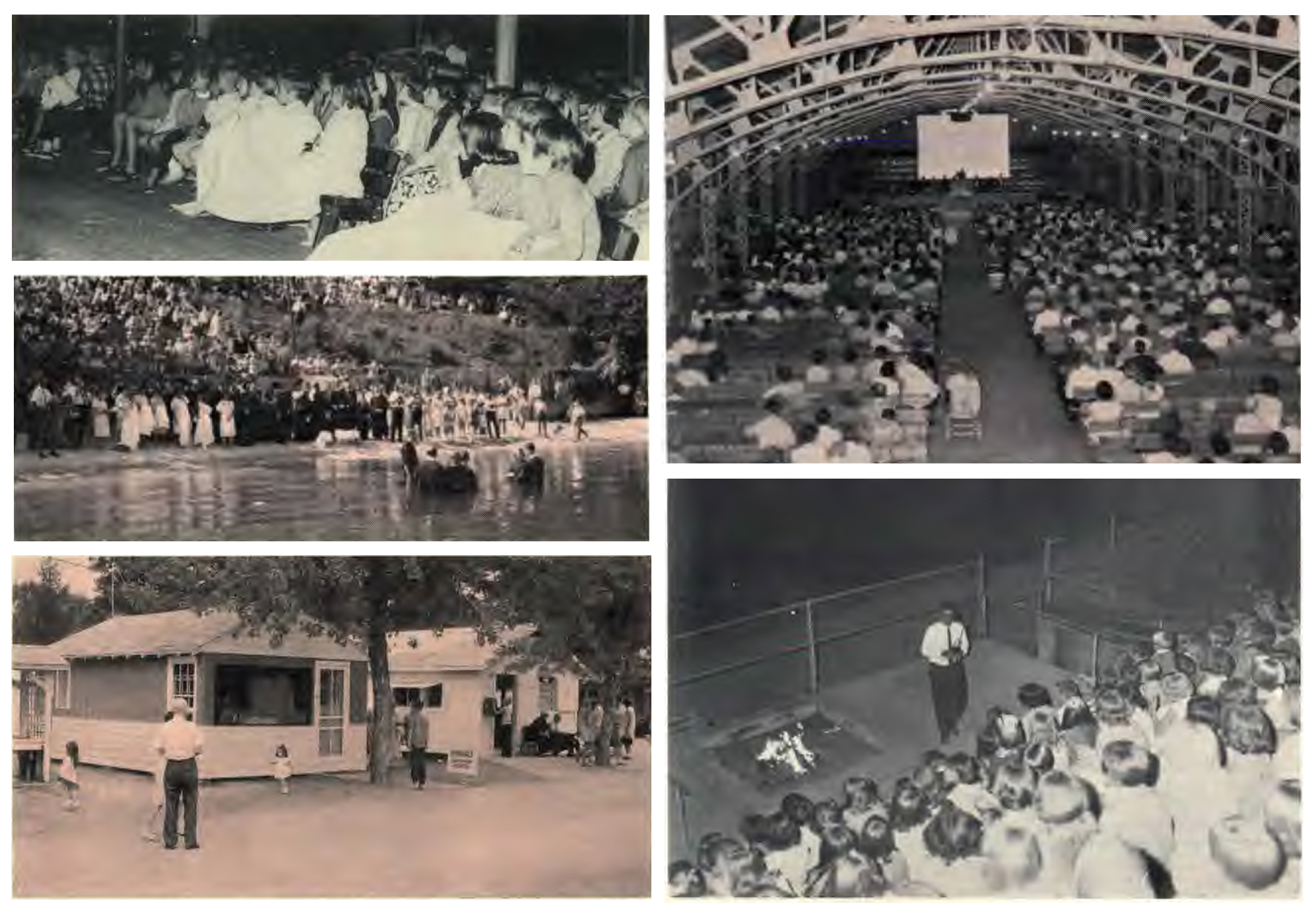 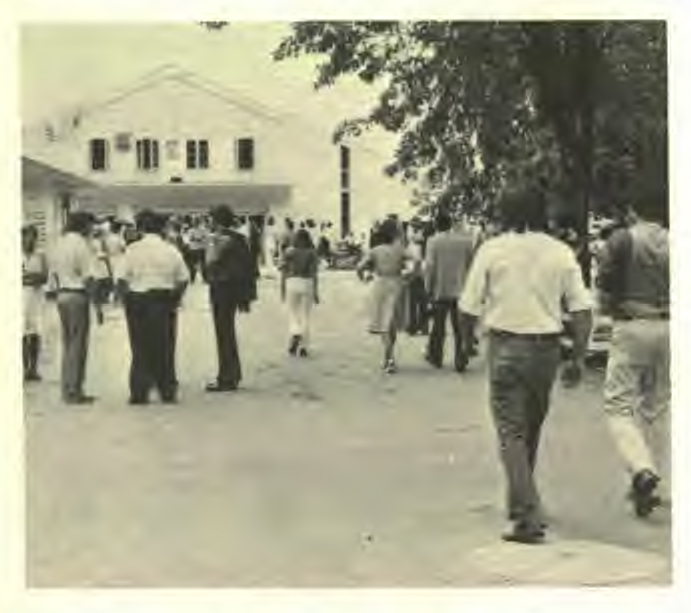 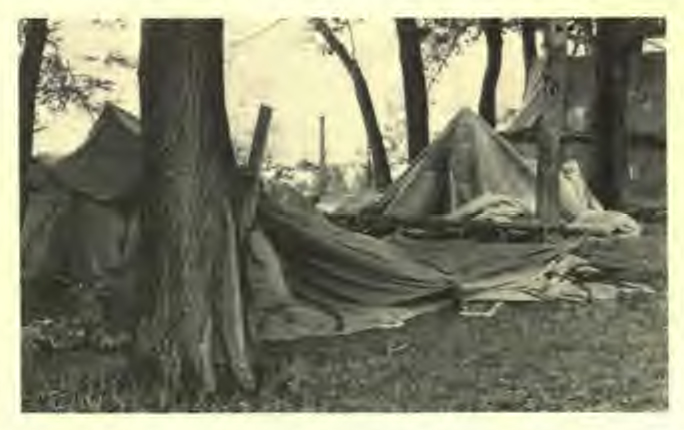 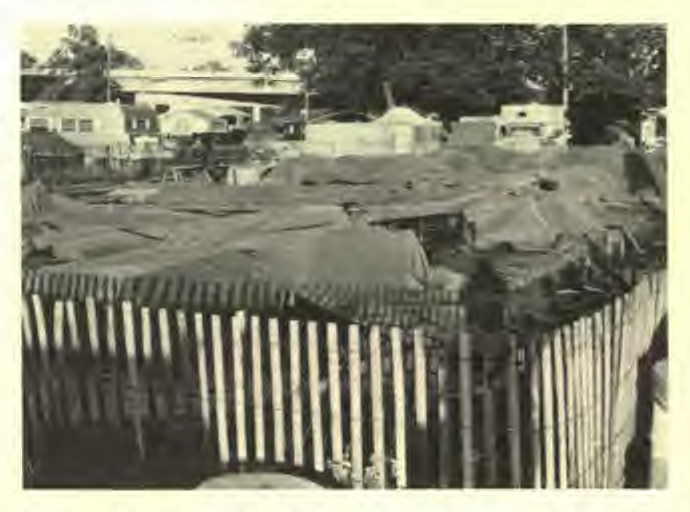 2007 First year we held the Hallelujah Hustle, a yearly 5K run/walk held each camp meeting since at Camp Wakonda. 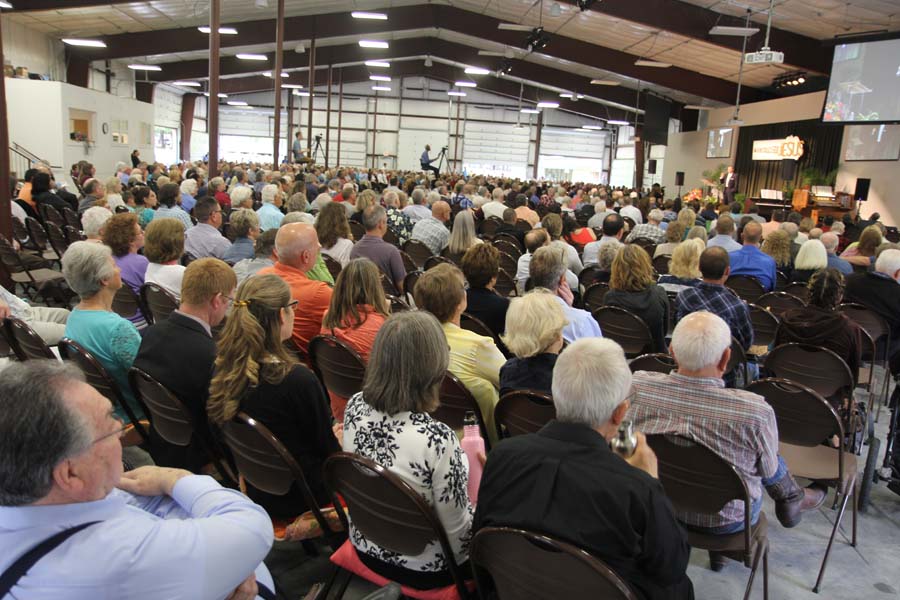