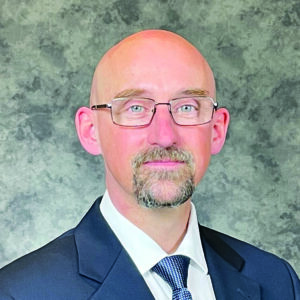 Scott Manly began serving as the pastor for the Rice Lake District in 2021. Over his 21 years in pastoral ministry, Pastor Manly has also served in the Michigan Conference and the Manitoba-Saskatchewan Conference in Canada. His first year in Canada was spent in missionary work in Nunavut, in the Arctic, working among the Inuit.

Pastor Manly was born and raised in Dalton, Georgia. Early in his college education, Pastor Manly studied Civil Engineering at Auburn University in Alabama. During this time, he came to a relationship with Jesus Christ and soon joined the Seventh-day Adventist Church. Eventually he changed his major and graduated in 1996 with a B.A. in Communication as he felt this would give him valuable ministry skills. However, it was not until a year after finishing college that Pastor Manly recognized the Lord calling him to pastoral ministry.

After two years studying Theology at Southern Adventist University, Pastor Manly transferred to Andrews University where he graduated with a Masters of Divinity in 2004. Two years later, he was ordained to the Gospel Ministry and has been serving as a pastor since that time. Pastor Manly says that his passions in ministry include “Christ’s method, and the intersection of science and faith.” He has written a Bible study and evangelistic series entitled Science and Faith: Real Answers.

Pastor Manly’s wife, Amy, was raised in Orlando, Florida. She is a certified reading therapist and assists students of all ages with dyslexia and reading lag. Amy is a devoted homemaker and homeschools their three children.

In his free time, Pastor Manly loves to be out in nature. He says his “heart is in the outdoors” and that he “loves to spend time in nature communing with God and photographing wildlife.” Together the Manly family enjoys camping and backpacking and the boys enjoy rock-climbing as well. While living in Saskatchewan, Pastor Manly started his second collection of pet tarantulas, which gave him opportunities to speak in libraries, schools, camps and nursing homes about overcoming fears and God’s creation. He refers to the tarantulas as his “missionary spiders” because of the opportunities he has had to share his faith with others through them.