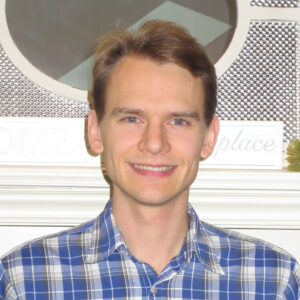 Christopher Erich began teaching 3rd-4th grade at the Milwaukee Seventh-day Adventist School South Campus in the fall of 2021. Christopher grew up in California, although he says that because his father was a teacher they moved every few years to a new location, eventually ending up in Oregon after he finished high school. From elementary through high school, he always looked up to his father, who was both a principal and teacher. Christopher says, “It was frankly amazing what he could do, and like him, I found myself interested in history.”

After some time at Pacific Union College and later Walla Walla University, Christopher found himself naturally gravitating toward the same track taken by his father. He graduated in 2014 with a bachelor’s degree in history and certification in secondary education. After graduation, Christopher took his skills overseas to teach English. Upon his return home to the states, he filled in as a substitute teacher whenever he could.

Christopher says, “Seeing the need for teachers, I stepped down from secondary (education) to teach elementary in Milwaukee, Wisconsin. An interesting change to say the least, but one that has felt God ordained for the times we live in.”