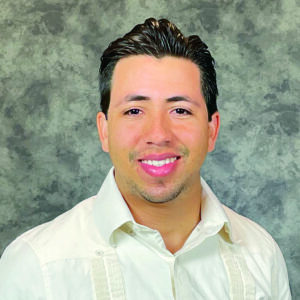 Pastor Cristofe Guzmán accepted the call to serve as pastor for the Sheboygan Hispanic District in 2021. Pastor Guzmán was born in Santiago, Dominican Republic and as a third generation Adventist he has been involved in the church his entire life. He says, “I had the opportunity to meet Jesus as I listened to the teaching of the Bible by my grandmother.”

At the age of 10, Cristofe publicly made his decision for God by being baptized and says that his passion for evangelism began while participating in his local Pathfinder Club. Shortly after his graduation from high school, at the age of 15, the Youth Director of the Dominican Union invited him to be an evangelical colporteur which would pay for his studies to become a pastor. During this time he met his wife, and in December of 2016 they were married. Although they do not have children yet, they anticipate the day they will become parents.

During his last semester of college in 2016, Pastor Guzmán received the invitation to pastor in the Gulf States conference in the state of Alabama. After a year and a half he was transferred to the Mississippi Coastal District where he and his wife enjoyed three and a half years of ministry. During that same time Pastor Guzmán was able to complete his Master’s degree in Pastoral Ministry from Andrews University.

Pastor Guzmán says, “Both Lilibeth and I are passionate about mission, visiting the brothers of the Church, serving our community, working with youth and children, among other ministries. We are happy to have received the invitation to serve in the Wisconsin Conference and very grateful to God for the family that we have found in this beautiful place.”